Thanksgiving Day is the busiest days of the year for plumbers… The disposer is part of the reason. When you really think about it, the garbage disposal is probably one of the most disgusting appliances in your home. Seriously, think about all the wasted food that is shoved down it every day! Now while this little guy may not be your favorite household accessory, it is a pretty important one – especially around the holidays.

So, in the next couple weeks be sure to give your disposal a little extra TLC!

Are you guilty of putting food down the disposal, but only running it once it’s full? Bad idea! This only allows bacteria to grow inside of your disposal – not to mention causing a foul odor to arise. Be sure to turn on the disposal (and water) every time you put something in it.

Contrary to popular belief, the garbage disposal is not the same thing as a garbage can. That said, you must be careful what you put down your disposal. Large, gritty items such as corn husks, potatoes, avocados, etc. should never be put down your disposal. Additionally, items such as egg shells and onions should be avoided as they can stick to the sides of the disposal and the shredder ring. You’ll also want to avoid items that can cause your drains to back-up, such as bacon grease. Size also matters! Never put large amounts of food down the disposal at once in order to avoid a major jam.

When is the last time you cleaned your garbage disposal? Never? Well, now is the time. Start by putting about ¼ cup of baking soda down the disposal, then pour about a cup of vinegar down with it. Once it starts to bubble, let it sit for about ten minutes. Then, run hot water and turn the disposal on until the mixture is flushed.

The last thing you want on Thanksgiving Day is for your guests to smell your disposal rather than your delicious turkey. If the baking soda bath didn’t get rid of the odor, try putting a few small pieces of lemon or orange peels in the disposal, then run water and turn on the disposal. The citrus oils will help freshen it up and the roughness of the peels will help clean the blades.

Tiger Mechanical Wins Most Professional Servicer at the 2020 ASTI Conference!

We’re Semi-Finalists in the UASA Most Professional Servicer Contest!

Why Is My GE Dishwasher Not Filling With Water?

How to Clean Your Dryer Lint Trap

Take a look behind the scenes. 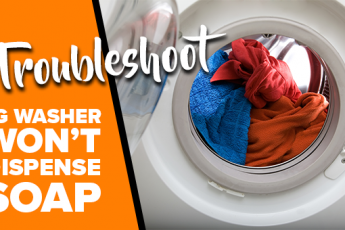 Why is My LG Washer Not Dispensing Soap?

February 1, 2020
We know that soap and water work hand in hand to clean and sanitize. So when you notice...

Tiger Mechanical Wins Most Professional Servicer at the 2020 ASTI Conference!

We’re Semi-Finalists in the UASA Most Professional Servicer Contest!

Why Is My GE Dishwasher Not Filling With Water?